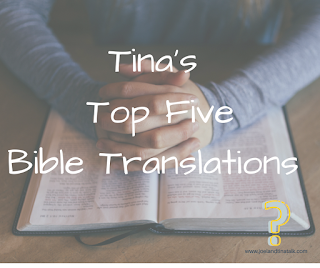 There are so many options out there in regards to Bibles. It can be hard to know which one is the right one for you. We can end up with a ton of Bibles and still not read them. I'm going to go highlight five different versions and what I like about each of them. And I'll share a John 3:16 from each of them so you can get a feel for what makes them different.

1. The New Living Translation (NLT). I've gone through lots of different versions that are my favorites over the years, this one is my current. It's easy to read, relatively easy to understand. But the best part is that it has so many different options. Tyndale Publishers is committed to making scripture accessible to everyone in that they publish the Life Application Study Bible, various different children's Bibles, and my favorite The One Year Bible.

For this is how God loved the world: He gave his one and only Son, so that everyone who believes in him will not perish but have eternal life.

2. The New International Version (NIV). This version is pretty widely accepted as a standard. It has inclusive language and does a fine job of taking out all gender-related references, which in my opinion is also one of its drawbacks. It is published by Zondervan and you'll find it in many churches as a pew Bible.

For God so loved the world that he gave his one and only Son, that whoever believes in him shall not perish but have eternal life.

3. The English Standard Version (ESV). This is an older translation, sometimes it's not as easy to understand. The reason why I like it so much is the well-done journal versions that are available with the text. I also appreciate the relatively free use of the text. The publisher, Crossway, appears to be more concerned about people sharing the word than prosecuting those that have not upheld their copyright guidelines, which to be honest are very generous in the first place.

For God so loved the world, that he gave his only Son, that whoever believes in him should not perish but have eternal life.

4. The New American Standard Bible (NASB). This is an old favorite. When I pick up this Bible, it's like returning home. It's the most literal translation of the ones I'm sharing. In fact, that's what it calls itself a literal English version. That makes it a little more difficult to read, but an excellent bridge version for those that are studying or have studied the original languages. Makes it much easier to find the word in question when you pull out the parallel Bibles. It is still easy enough to read, though because of its literal bend, doesn't flow as easily as some other versions. This is different than the NAB, the two do not include all the same books, but that's another post for another day.


For God so loved the world, that He gave His only begotten Son, that whoever believes in Him shall not perish, but have eternal life.

5. The New King James Version (NKJV). If you love the King James Version (KJV), but your eyes and mind get a tiny bit tired as you read through the thees and thous, this is your Bible. It's basically much of the same beautiful language as the KJV but just a little bit easier to read. The Psalms are particularly delightful.


For God so loved the world that He gave His only begotten Son, that whoever believes in Him should not perish but have everlasting life.(NKJV)

For God so loved the world, that he gave his only begotten Son, that whosoever believeth in him should not perish, but have everlasting life. (KJV)

Can't decide which one is right for you? Well, you're in luck because Crosswalk has a great quiz to help you pick. Click here. Feel free to share any questions you may have in the comments.

Popular posts from this blog

July 24, 2018
This week we talk about 1 Peter 5. We discuss Satan, worry, and Monty Python and the Holy Grail. If the embedded player doesn't work for you, you can follow this link to listen to the podcast directly  https://archive.org/details/WTA1Peter5
Post a Comment
Read more

October 02, 2018
A new series on Nehemiah. This week, we talk about chapter 1 and discuss the shortest person in the Bible, repentance, and serving where you are.  Intro Song information  Greeting the Day with a Smile by  Doug Maxwell/Media Right Productions
Post a Comment
Read more

November 05, 2018
This week, we talk about Nehemiah being sad and some foreshadowing of bad things to come. Logo designed by The Hanizoo https://www.deviantart.com/thehanizoo  Intro Music: Greeting the Day with a Smile Doug Maxwell/Media Right Productions https://www.youtube.com/audiolibrary/music
Post a Comment
Read more 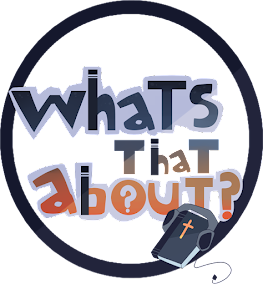